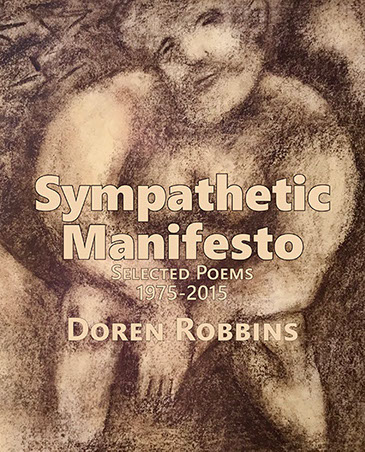 Doren Robbins’ Sympathetic Manifesto is in the tradition, aesthetics and vision of Whitman, Williams, Rexroth, Neruda and other great poets while being uniquely his. His poems without clichés are in the way the mind actually works, the way narrative works in dream, the metaphorically rich talk at the workplace. Not cut to the bone language or the correctly crafted poem mostly taught today---he didn’t set out “to write like Marianne Moore or Stevens,” “language editing reality,” but from a “shamanic imagination,” a free rambling exploration, a breathtaking intensity, what the poems are saying (not displaying ) out of the reality in which they’re rooted, the way we live, think and know, line of thought rather than metaphor to replace thinking, dream and nightmare, language freed.  Memory as past reality, as evidence, as testimony, not fiction or fantasy as is largely maintained.  Memory as fidelity to our unbearable history that we must bear, fidelity to our present day realities.  Sympathetic Manifesto in brilliant poetry sees and says how bad things are, rants, raves and rebels, while it simultaneously ponders, struggles, sings, and loves.  Robbins doesn’t lay down another program to replace the reigning death one.  We have to see and say and out of that evolve not another program, but find freedom, fidelity to knowing and living. That, in its own, would be freedom from what imprisons us.  Sympathetic Manifesto: Sympathy for those who are imprisoned in the hell, Manifesto against that hell that must be overturned. Our history has been a perpetual back and forth, bad into good into bad, rather than forward, rather than some possible advancement.  Robbins’ liberating poetry moves the way we move through our trapped lives, but despairingly see freedom. He gives hope as does his original, superb art.

One listens to Doren Robbins’s poems as if pressing a forbidden radio receiver to one’s ear in order to learn the news of our actual day-to-day living conditions. Here is a poet whose fervent, anarchistic monologues overflow with poignant vulnerability. Of his generation of poets, very few have as forthrightly brought the alternative canon of West Coast poetry into substantial dialogue with the present crisis and made that conversation worth rereading until it’s fully absorbed. Memorable poetry is rarely this fearless or as candid about the consequences of risking one’s life in devotion to “whoever it is I’m / always talking to in my head;” and in our heads, too, reiterating the desire to free ourselves from our mind-chained manacles. In the illuminated vortex of these searing poems, a road of possibility emerges. Prepare to meet not just a comrade, but an amazingly eloquent visionary whose writing you will cherish for its extraordinary audacity.

Doren Robbins’s Sympathetic Manifesto presents an unmasked magnum mural of our world.  From the mostly backroom labors and laborers in commercial kitchens to the mostly pushed-back labors and laborers of perception and social consciousness, Robbins’s builders, lovers, teachers, and other others—including “carcinogenicized insulation installers” and “military flip-outs” and “meltdown cleanup crews”—place us, again and again, within arm’s reach of each other and newly in touch with ourselves. Here are actual energies of experience: some hold our world together and others threaten to tear us all apart. Meantime Robbins’s poems do hold it—meaning us—all together in endlessly flexible formal proximities, novel nearnesses that challenge and restore our sense of wonder to act out its essential role in the labor of living.

––Ed Pavlic, author of visiting hours at the color line

...Robbins loves the people and places the world has allowed to drop out of history or, for that matter, never let in.  He’s taken the chore of a new Adam and set about the naming of all the earlier one never got around to, for the earlier one never got as far as North Hollywood or Pico Boulevard.  Naming the unnamed is Robbins’ first priority, noting the unnoted, filling in all the details of those lives that have waited for ages, perhaps since Villon, at the frontiers of poetry for an invitation to come in…Robbins’ work sounds very little like most of what is being published in America by poets his age and for the simple reason that he’s consumed by what has driven him to fury.  I would guess that he’s read Wallace Stevens and Marrianne Moore, but he doesn’t seem to have the least interest in replicating either or in creating a surface so ornate and seductive that the reader doesn’t bother to ask what, if anything, is beneath it.  He comes out of another tradition, one we forget in these indifferent times at our own peril, the tradition of the aforementioned Villon, of Corbiere, Celine, Henry Miller, Tom McGrath, and most recently Gerald Stern, the great outsiders who bless our daily lives with their boundless love and rage.

These are remarkable, fiery poems. Poems that would urge any poet on, language that tears open reality. I think this is Doren Robbins’s finest book, and I’ve admired his work for a good while. The imagination, its energy and precision, is immense. There’s a delicate observation of even the rawest materials, a tenderness for humanity in all its cruelty, stupidity, and often invisible dignity and grace, that feels to me like his peculiar, original contribution to—well, to the puzzle of what we have become: people, Americans, men and women today, above all those who are “absent,” unregistered, undocumented in both senses.

What sets Robbins apart from other poets is the unyieldingly honest gaze he is able to turn upon himself, his family, and his country. He doesn’t attempt to obfuscate or omit difficult truths, but instead addresses them directly, tying the present to his own past, his family’s painful past, and a long view of human history, particularly the historical moments about which we ought to be the most ashamed. While he examines his past, his family, and his country, he speaks truth to power and pulls no punches. And in the midst of it all, even when dealing with the historical subject matter that often challenges the poetic qualities of many poets’ work, he manages to instill rhythmic phrasing and richly musical sounds into each of his poems. His ability to mix such explicitly political subject matter with such a high level of poetic artistry is a rare gift among contemporary poets. And while art alone cannot bring an end to the atrocities of war, one begins to believe when reading his work that, if a few more poets had the courage and vision to tackle the difficult subjects Doren Robbins writes about, such subjects would be less absent from our collective consciousness, and just maybe, history would give him a bit less to write about.

The first poem alone is worth the price of admission to the world of heightened consciousness and informed memory in throughout Doren Robbins’ Selected Poems. “Experience has not nearly increased accuracy enough,” Robbins writes, as he assembles in poetic form, out of the flotsam and jetsam of remembered experience, a kind of philosophy of the poignant detail. Whether rescuing a butterfly or buying a house, doing kitchen prep in a Studio City restaurant, or saving cats on two continents, Robbins’ roving eye can’t help noticing that there is pain in existence, that often that pain is buffered by a kind of unconsciousness, that suffering rarely ennobles its victims, that, often, instead, “you starve over that bloody soup.” Yet a bemused optimism is as much a part of this collection as the author’s discrete anger over the dumb cruelty of life, as in teaching his nephew to feed squirrels, “so as to find out what they are like...their endless appetite, their elegance,” he makes of living a metaphor of wonder.

Doren Robbins' poems are both poignantly personal and boldly political. They are passionate and lyrical, as you expect of the best in poetry. He is a keen observer of family life as well as the larger world outside, and a pleasure to read.

What of the tired, the lost, the cast aside? We behold them all, revealed in their human complexity with tenderness, wit and rage in throughout Robbins, work.  His vision is necessary and vital, from his Chagallesque portraits of characters like Mrs. Penser of 5th Street Market with her deformed “death camp fingers,” Abrams, the immigrant-tile-setter-turned-deli-man-in-America, the eighty-four year old Anna with her “kelp beds of fake jewelry,” to his vast, unflinching vision of L.A. in “My Pico Boulevard.”  I admire the gritty, original, uncompromising voice that drives these rich, furious poems.

Wandering through Sympathetic Manifesto is a delicatessen Walt Whitman, satirical yet dead-serious and playing for keeps, coming to grips with the infernal system of his life in a twentieth to twenty-first century ironically and grotesquely distorted American hell. It’s a kaleidoscopic ride through his personal and cultural histories, careening on a precipitous edge of critical delirium and self-mocking humor. The confessional voice woven through Doren Robbins’ poems brings to mind, in a fragmented hall of mirrors sense, the self-revelatory stanzas in Whitman’s “Crossing Brooklyn Ferry,” but now the river is underground, the ferry has become Rimbaud’s Drunken Boat and the city is an infernal ruin populated with labyrinthine memories of alienated and damaged souls caught in the contradictions generated by dystopian capitalism. 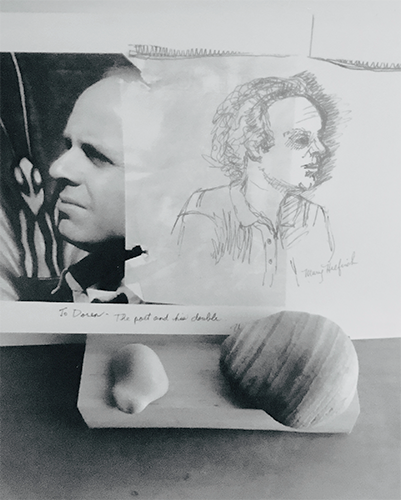 Doren Robbins is a poet, mixed media artist, and essayist. His work has appeared in many publications, including The American Poetry Review, Another Chicago Magazine, Exquisite Corpse, Lana Turner, Otoliths, Sulfur, Kayak and The Iowa Review.  His books have been awarded the Blue Lynx Poetry Award 2001 and the 2008 PEN Oakland Josephine Miles Poetry Award. In 2020 Spuyten Duyvil Press published his monograph, Apocalypse Contemporary, on Sharon Doubiago’s book Naked to the Earth; and highmoonoon books published Not Fade Away: Poetic Prose Monologues, Three Sequences. Sympathetic Manifesto, Selected Poems, 1975-2015 is his fifteenth book. He is Emeritus Professor of Creative Writing and English at Foothill College.