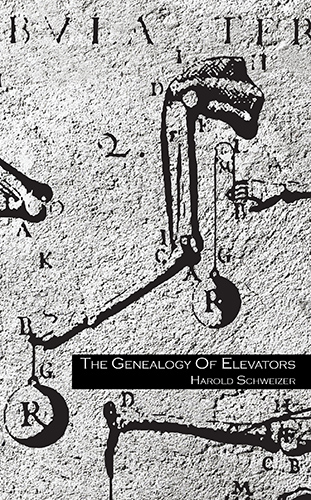 The Genealogy of Elevators

A dark, cracked parable in the tradition of Millhauser by way of Kafka, Sebald, and, perhaps, St. John Climacus.  Schweizer’s lyric exploration of capitalism, its artifacts and (especially) its denizens, casts an eerie spell.  There is nothing else quite like this in contemporary American poetry.

The Genealogy of Elevators awakens us, with metonymic and lyrical sharpness, to the devious mechanisms through which economic systems that both thrive on and regulate our “consumptive practices of all things material and mental” reproduce and profit from injustice and subjugation. So consummately crafted is Schweizer’s fable, so inextricable its riveting syntax from the complexities it conveys, that the literary pleasures it yields work to intensify, to necessary ends, our sense of complicity. Awakened to the sordidness and misery of lives used as “counterweight” for the smooth “glide” of our literal and figurative “elevators,” we cannot but recognize, with a shudder, how incisive a parable of our times this is, how implicated we are, and have always been, in the eroding of our common humanity, in robbing the disenfranchised of sustenance and dignity, then turning them against one another. This fable’s “shafts of life” echo Shabine’s words (in Derek Walcott’s “The Schooner Flight”) on how progress, built on those it excludes, “is history’s dirty joke.”

With The Genealogy of Elevators, Harold Schweizer pulls off a steampunk reimagining of the history of urban technologies—and industrialized oppression. The old familiar tales distract us with heroes and long-forgiven excesses. Here those cede to a landscape in which the same modern wonders emerge—elevators, light bulbs—but by new routes, with fresh mythologies to lipstick the pig. What are these people doing? What are we allowing to take—no, to make—place?

Harold Schweizer’s The Genealogy of Elevators: A Fable is a marvel, a book about writing and violence and bodies that is also a history of machines.  In these gorgeous prose poems, urban landscapes echo with fairy tales, Dante’s Inferno, the Ten Commandments, songs, and translations.  Most of all, this is a book about language, its slippages and ruptures, its inadequacies and its exhilarations.

Harold Schweizer is Professor of English at Bucknell University. His two prior books of poetry are The Book of Stones and Angels (2015) and Miriam’s Book: A Poem (2017). His most recent publications in philosophical prose are On Waiting (2008) and Rarity and the Poetic: The Gesture of Small Flowers (2016).