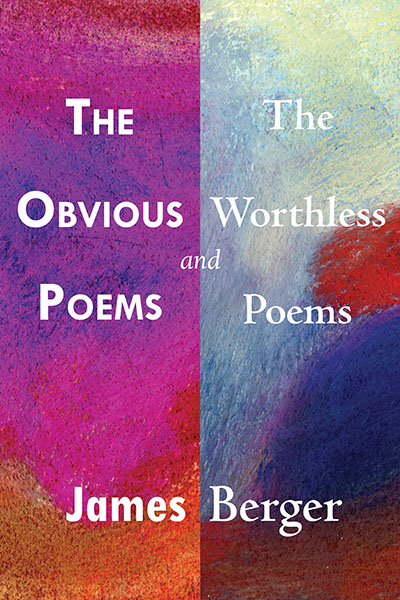 The Obvious Poems and The Worthless Poems is a title that smacks you upside the head. So it’s worthwhile to state the obvious: James Berger may have divided his latest book into two sections—the first of politically and socially aware poems, intensely alive to the accelerating disintegration of social, ecological, and ethical order in the world around us, often descending into incandescent (and wholly understandable) rage, the second of wordplay, formal experimentation, and wonderfully acute, often tender quotidien observation; but his obviousnesses are far too profound to be merely obvious, and what he calls “worthless” is worthless only by the standards of hedge fund managers and petrochemical investors. Once upon a time, Horace said something about poetry being for “instruction and delight”: Berger’s still working that vein, loading every rift with ore.

What is there to say that we don’t already know? James Berger, poet of the obvious asks; obvious from the root meaning in the road, in our way, a fallen tree, or a fallen, chaotic world.

What matters now, if not simply to be here? like this enraged, compassionate, acerbic, romantic, worried, truly human being—a scribe with a deft ear.

I dreamt I was improvising

and I was naked

not as in most dreams

(suddenly astonished embarrassed) but open, necessary, part of the music.

But I meant to say also of this poet of worthless poems, of events as brief and insignificant as the red of a cardinal, or one’s own life, or death, I meant to say also, humble, stalwart, hopeful as well as doubtful (if not in equal measure), happy and regnant/in movement.

Everyone has felt it, electricity of the fingers,

the merger of eyes into face-- not death,

just the shedding of context: the inhalation exhaled

These satiric, polemical and talk-filled poems mark a chilling yet humane recognition of this obstacle-laden world, so painfully slow to enact crucial social and ecological changes. Berger’s brisk work takes soundings in the systems visibly failing all around us, and he puts his findings in message-poems and bulletins to frame the necessity for transforming all this —but how? is the stark question.

“There is an ever-present intensity to James Berger’s Prior through which the reader plummets. Full of complex and particular insight, by turns darkly comic and comically dark, these poems are as unafraid of regret an anger as they are of quick surprise and happiness. Prior testifies to what it means to be ankle deep in a new century, one marked by sound and fury and the astonishment that words still hold us fast to what is yet to come. Berger is a poet for this, our only, right now.”

“With Prior, Jim Berger offers up exuberantly dark and witty meditations on the past, maggiage, love, maturity, projects, protecting one’s children, cultural amnesia, violence, kindness, and the impossibility of the present moment. These poems lean into the future and reach back to prior orders of suffering and loss, swinging wildly between disillusion and hope. They give us a sense of the fierceness of being alive, and the sheer gift of being able to reflect on what that means. They remind us, beautifully, of our brevity in this world.”

“James Berger, the unseen hand behind two searing volumes of OBU [One Big Union/ Oligarchy Busters United] manifestos, emerges into light in Under the Impression. Known in the OBU books as an advocate for labor unions, radical politics, and yet-unimagined forms of social solidarity, here we encounter a poet whose imaginative and intellectual cv includes many passions: the history and literatures of ancient Greece and Rome, art, basefall, jazz, puns (good and bad), insects as beings and as metaphysics, tennis, fatherhood (from both sides), a mother’s death, marriage, intellectual disability, sex, John Ashbery, hiphop rhymes, friendship, and poetry as form, profession, aesthetics, politics, satire, and lyric. Where OBU was a “project,” this volume projects many more lenses of Berger’s fly-eye. This is a manual on how to see the contemporary world and to survive that seeing, while knowing that ‘It’s only now that the saddest thing in the world is joy.’”

“Under the Impression transverses the spongy dents in the surfaces of language and memory. Anti-lyrical and insistently lyrical, frank, interrogative, and punctuated with humor, Berger’s poems articulate brilliantly an inventive scepticism of the real world’s edges and fictions. Lines like ‘The cat is chasing the bouncing ball./ Can you determine if that is a true statement?’ and ‘What’s so pressing?... We will see the shape when we no longer see the violence’ imbue Berger’s reader with a monstrous sensitivity toward the perceptible persistence of absense, time, injustice, and the possibility of happiness.”

“One Big Union aka Oligarchy Busters United–a serious and radical hoot, a real send-up and a real, passionate intervention–these Blakean manifestos for our pluri-poly-inter-problemantic NOW-TIMES smash and reconfigure the relations between politics (explicity), situationist aspiration (informed), aesthetics (pointed), and aspire to a metamorphic (dada?) democracy–all with a fierce and witty love. Ingest the transformative OBU; readiness is all.”

“The OBU Manifestos offers evidence of a poetic imagination at work, imagining in the best utopian fashion a world of human mutuality the direct obverse of the oligarchical nightmare into which we seem to be descending. If it can be imagined, then it can be–or ought to be–realized, and The OBU Manifestos is an advanced primer in turning imagination into reality. 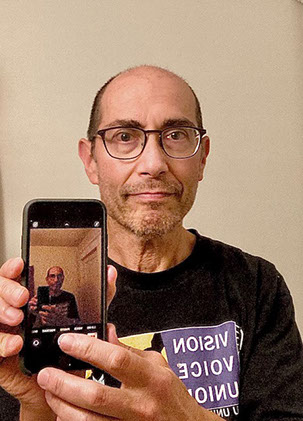 James Berger’s bios continues, but feels increasingly detached from its graphein. Nonetheless, he lives in New Haven CT and professes, at Yale, Literature and how it got there. This is his third book of poems–or maybe his fifth, depending on what category the OBU Manifestos books are to be placed in. He has written two scholarly monographs. He works now on “The Book of Impasses,” concerning our imaginative failures to conceive a just and sustainable future, which includes, at a lower pitch, his failure to write the book. He is married to a historian, Jennifer Klein, which does give him some hope for the future; and is father to two daughters, Hannah and Teya, who are now better musicians on violin and flute than he ever was on his glad euphonium; and they give him more hope.

These are his books, to this point: After the End: Representations of Post-Apocalypse (U. of Minnesota Press, 1999); Prior (BlazeVox, 2013); The Disarticulate: Language, Disability, and the Narratives of Modernity (NYU Press, 2014); The OBU Manifestos  (Dispatches Editions/Spuyten Duyvil, 2017); The OBU Manifestos, vol. 2 (Dispatches Editions/Spuyten Duyvil, 2019); Under the Impression (BlazeVox, 2020). He also edited and wrote the introduction to The Story of My Life: The Restored Edition (by Helen Keller; Modern Library/ Random House, 2003.