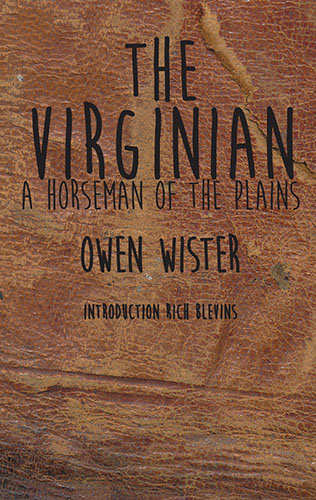 with an Introduction by Rich Blevins

Bang went his Winchester. The bullet struck close to my left. I sat up angrily.

“That’s the fIrst foolish thing I ever saw you do!” I said.

“Yes,” he drawled slowly, “I’d ought to have done it sooner. He was pretty near lively again.” And then he picked up a rattlesnake six feet behind me. It had been numbed by the hail, part revived by the sun, and he had shot its head off.

Donald Trump’s conviction is a matter of public record: women in America, at best second-class citizens like Molly Wood, have their proper place. See:  “Lock Her Up!”, Stormy Daniels, “Hiawatha,” and the “Access Hollywood” tape. Wister chooses Wyoming for his novel’s mise-en-scène knowing its nickname “The Equality State” commemorates Wyoming’s advance in granting women’s suffrage. However, we also know that Wister, an apologist for Social Darwinism, feared what change the enfranchised female might visit upon democracy. In Chapters V and VI, Wister has irrevocably linked the pixilated Em’ly (“She is just one of them parables,” is the Virginian’s non-explanation) and Molly Wood!  One might expect only a morbidly sexist man or a Social Darwinist sexist would equate his heroine, a virgin schoolmarm who cared for others’ children, with Em’ly, the ranch’s spinster hen who committed acts of immaculate brooding—and separately publish the slander for a gentleman’s “humorous” short story condemning a woman’s right to vote. It is in this same Chapter XII when we witness Molly Stark Wood’s de-evolution from primary character into designated mate for the story’s natural aristocrat-in-the-making. Wister created Molly Stark Wood of Bennington, Vermont for his novel’s leading lady, the “sincere spinster” who could if pressed claim the pedigree of a Revolutionary War family, the kind of “good blood” that would turn on a Social Darwinist. The historical “Molly” Stark, wife of General John S. Stark, has a state park named after her for the active part she played in the Battle of Bennington, on August 16, 1777. An elitist Owen Wister denigrates Bennington to a backwater burg, in denial of the fact that he could trace his own family ancestry back to the Bennington of William Ellery Channing, the Unitarian and Transcendentalist thinker. In fact, Wister’s Harvard had been redesigned by university president Charles W. Eliot in part after ideas championed by Channing. And Wister’s wife and second cousin, Marry Channing Wister, was an outspoken civic leader in Philadelphia. Her nickname was “Molly.”

Rich Blevins, from his Introduction