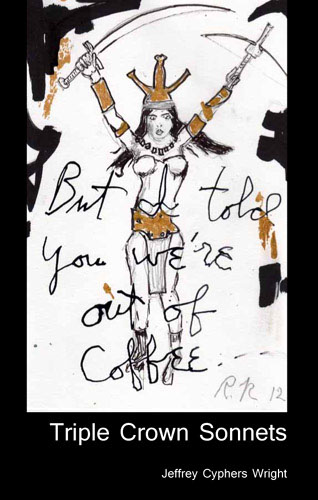 While most contemporary New York School poetry seems aimed at like-minded, coterie hipsters, Wright’s poems ostensibly are directed (as were Shakespeare’s sonnets) to a single ear.

THIS IS A GREAT BOOK! Jeff Wright has become the first human being to win the Kentucky Derby, Preakness and Belmont. Take that, Equines! He did it the poet’s way—he crowned himself with sonnets, and gifted them to the world. Reciprocate his generosity by reading with your whole body. And they’re off!

Wright’s had always a surrealistic edge to his work combined with a clarity that puts him in a league all his own.

Jeffrey Cyphers Wright’s work is dazzling, befuddling, up and down, and impossible to crown, though he writes in the impossible form of the shattered Corona. His work is full of good humor, but it is also as wildly rumbling as the elephant in mourning. As archaeologists find new skulls, so Wright discovers impossible anamorphosis of poetry. The work seems to come out of Ted Berrigan’s sonnet sequences, then suddenly it seems to veer into all possible sequences, a globalism which is the point. Not to like these works is like rejecting New Orleans because it is full of pleasure. Everything seems to be packed in here, even oneself. But the self that you discover is strange and seems like nothing you had guessed as yourself before. We have just stepped on Mars by mechanics; Wright has been there for a long time by human means and refusing to clean up. “Between the mess and the message” and the mesa and the mismatch, there he lies.

Upon arriving in New York in 1976, Wright studied with Ted Berrigan and Alice Notley at St. Mark’s Church. He also studied with Allen Ginsberg at Brooklyn College and received an MFA in poetry. In the late 1970s he performed at PS122's avant-garde-arama. He started Hard Press in 1978 where he published three books, including the anthology 3-Zero, Turning Thirty, and 100 postcards by different artists and poets. A selection of the postcards were included in the book A Secret Location on the Lower East Side, and were displayed at New York Public Library. Wright read often at St. Mark's Poetry Project between 1979 and 1990 and served a three-year term on the Project Board of Directors. In 1996, Wright performed in two of the Museum of Modern Art's poetry series curated by Lita Hornick.