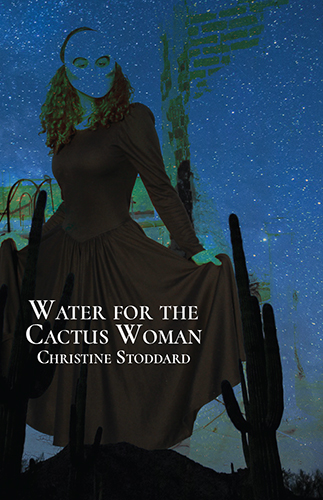 Water For The Cactus Woman

The fragmented nature of Latinidad is set against a backdrop of the surreal, making the speaker’s jealousy of her dead the most provocative thread in the collection."

Water for the Cactus Woman is an uncannily

familiar story about first unrequited love: that of madre absent and grieving and that of abuela prematurely gone but hauntingly present as torrential silence and forlornness—and that of many madres/abuelas before and that of many madres/abuelas after. Water for the Cactus Woman is “a coyote’s last cry before the hunter’s bullet” is “a drippy desert watercolor” is “a dewdrop of hope.” It is a cactus split spilling nectar, desert oasis blooming after monsoon, the sun finally shining its light on you. It is the primal thirst to love and be loved. It is the hopeful courage that self-love could fill all the heart chambers after all.

A wash of stunning sound and imagery (“Guava nectar was Mother’s elixir ”), the poems and art/photography in Christine Stoddard's Water for the Cactus Woman are confessional, transformative, mother myth and family story. A  biracial daughter and granddaughter struggles with her maternal and paternal lineage to root her identity among stories of rebellion, unwanted pregnancies and racism within families: "Any biracial child with/ a white parent/ stares down this choice:/ to identify as the oppressed/ or the oppressor." These fierce, bilngual poems are pierces of a heart balancing between surviving rape, longing for mother love, traversing memory and architecting a different future in an uncertain America: “I can only hope/ that God loves me/ because Abuela is/ but a ghost/ and ghosts cannot love. // Love is for the living."  This many-layered collection of poems must be simply savored and re-read.

Nicole Rollender, author of Louder Than Everything You Love and Ghost Tongue

Stoddard talks to Ms. about the challenges of her childhood, the dissolving wall between literature and the art world and her need to make feminist art in the wake of the Kavanaugh hearings."

Laden with family history, mother-daughter dynamics, and the tension between memory and experience, Stoddard’s luminous work moves effortlessly between languages, between image and the written word, between two cultures, where the author sits brilliantly in equal suspension between both.  Each poem becomes a palimpsest, a layering and erasure, of the past upon the present.

Water for the Cactus Woman unfolds like a photo album. We move from El Salvador to New York to Phoenix and back again, piecing together a complex family history riddled with secrets and hardships as Stoddard considers what it means to be a woman, a mother, a child, Salvadoran, American, and much, much more. Each poem reveals a new memory that builds upon the last, and Stoddard's dazzling language blooms on the page like a desert flower.

It’s nothing new that Christine Stoddard is a multifaceted artist, but nothing exhibits that more than Water for the Cactus Woman. Its poetry and photographic collages blend into one to tell the story of woman affected by the world into which she was begotten. Yet, this tale isn’t one recounted simply by womanhood, but by rape, death, the impossibility of love unconditional, and how this world errs a woman they do not even know. It is a sublime commentary on the social peculiarities of poverty, asinine racism, and the current political climate, all of which Stoddard has painted into norms. But it isn’t Stoddard who has normalized these evils, but rather it is the world. The author, in fact, holds up a mirror to this reality, with nothing more than the fervor of a woman’s ingrained strength. And each line of this collection presents that remarkable and unforgettable strength through-and-through. “‘You will live!’ / I screamed— / not to the Saguaro, / not to the moon, / but to myself.” Christine Stoddard has done with this book the one thing that she does even better than tell stories with words and imagery—she’s brought to life a narrator whose parable will resound with readers forever.”

Anthony Ramirez, author of Where He Lay Down and the forthcoming Less Than Butterflies 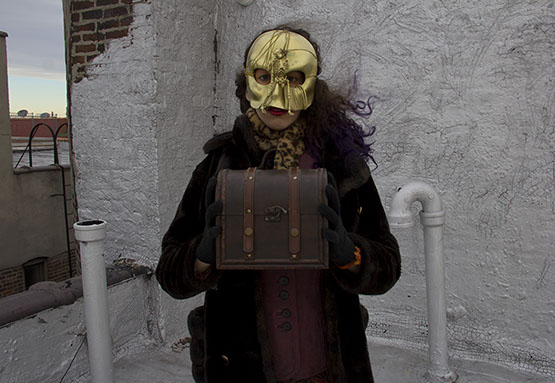 Christine Stoddard is a Salvadoran-Scottish-American writer and artist originally from the Washington, D.C. metro area. Her books include Jaguar in the Cotton Field (Another New Calligraphy), Ova (Dancing Girl Press), Chica/Mujer (Locofo Chaps), Lavinia Moves to New York (Underground Voices), Harlem Mestiza (Maverick Duck Press), Hispanic and Latino Heritage in Virginia (The History Press), and other titles. She currently lives in Brooklyn, where she runs Quail Bell Magazine and studies as a graduate Connor Art Fellow at CUNY-The City College of New York.