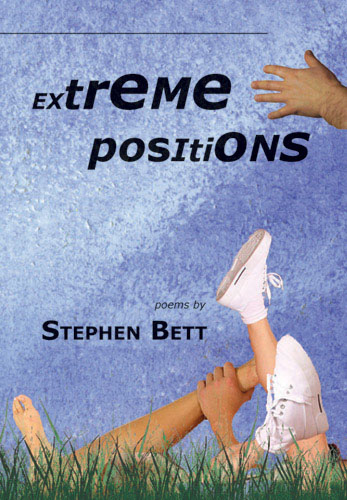 Spent quite some time going through Stephen Bett’s work. Was impressed by the consistency of voice & tone. Read quite a few out loud to catch his modality. Lots of quick skips and shifts you don’t catch if you read too quick. Reminded me of Olson’s comment on Pound, how his mind moves like light on water.

Keep going with this sequence. The soft-core-help-books on sex really deserve to be skewered. I like reading mocking, dismissive, and allusive humour, especially when it shows up in your poems.  Always will.

I’m already a big fan of your poems, so these ones only corroborate that fact. You have great energy and are full of life and, my god, you sure know how to write....Great fun. I really like the poetry -- immensely!  I know if Joel Oppenheimer were alive he would love your new book of poems. These are just the kind of poems he championed. All the poems are very good in this collection, but some are sensational, really, and I marvel at their execution and delivery, they are so full of jazz and what comes after jazz, whatever that is. ...The book is a seamless entity, joined by these parts (the poems), telling the story of a man in the beginnings of the new century. They are pleasing to the ear, pleasing to hear, they look good on the page, they are so subtley crafted. ...Bravo! I’m still reading your books and still liking reading them, great stuff, in fact.

His work has also appeared in over 100 journals in Canada, the U.S., England, Australia, and Finland, as well as in two anthologies, and on radio. He is a member of the English Department at Langara College in Vancouver.