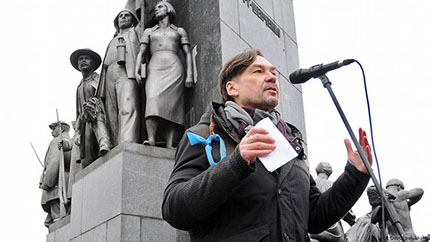 Yuri Andrukhovych was born March 13, 1960 in Stanislav (now Ivano-Frankivsk), Ukraine. In 1985 he co-founded the Bu-Ba-Bu poetic group, which stands for бурлеск, балаган, буфонада--'burlesque, side-show, buffoonery' together with Oleksandr Irvanets and Viktor Neborak. Yuri Andrukhovych is the father of Sofia Andrukhovych, who has also become a writer. Andrukhovych writes in Ukrainian and is known for his pro-Ukrainian and pro-European views, however he is rarely considered a Ukrainian nationalist, a charge he fiercely denies himself. In his interviews, he said that he respected both the Ukrainian and Russian languages and claims that his opponents do not understand that the very survival of the Ukrainian language is threatened. During the 2004 presidential elections in Ukraine he signed, together with eleven other writers, an open letter in which he called Sovietic Russian culture: "language of pop music and criminal slang". To date, Andrukhovych has published five novels, four poetry collections, a cycle of short stories, and two volumes of essays, as well as literary translations from English, German, Polish, and Russian. His essays regularly appear in Dzerkalo tyzhnia (Mirror Weekly), an influential trilingual newspaper published in Russian and Ukrainian with excerpts published in an online English edition.