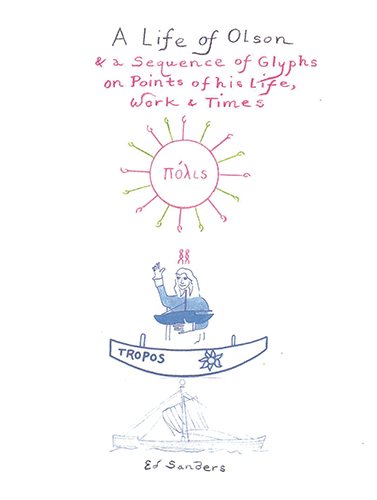 & a Sequence of Glyphs on Points

of his life, work, and times

A Life of Olson & a Sequence of Glyphs is equal parts oracular biography and ocular surfeit, as if Ed Sanders’ lines of bios (“life”) were translating from a dead language into life his hand-drawn graphia (“to record by lines drawn”).  Olson has never ceased calling the poet to see for oneself—and Sanders lets us see Olson for ourselves, through his almost tactile trove of glyphs, documents, and data clusters.  This is a method familiar to readers of Sanders’ recent illustrated biography of RFK and admirers of classics like 1968.  In Sanders’ neoEgyptian glyph, we see Olson creating himself as a radical Melvillean, constructing Melville’s Book Boat…Olson at a Roosevelt rally at Madison Square Garden about to introduce Frank Sinatra to the crowd…Olson in Key West, in the Hemingway House bungalow, where he “writes daily at Ernest’s own desk.”  We tag along on a walk with Gerrit Lansing on Stage Fort beach, when Sanders “sees” the tansy reference from “Letter 3.”  We see Olson, fresh from Yucatán, who has

…brought the Spirit of the Glyph

where they had a “Glyph Exchange” that summer

among the guest faculty.

a drawing A Glyph for Charles for a poem

with a set by Shahn, music by Lou Harrison

All hail the Glyph

We see, by consecutive glyphs, Olson surveying the site of his wife’s fatal car crash for clue bits becoming the marginalia bits that make Olson’s three unpublished poems to her…Olson has nailed his writing desk to a Dogtown tree…Olson the seer-poet eating magic mushroom by the handfull like peanuts.  See for yourself:  how does Charles Olson make out when Sanders the Fug sets him up with Janis Joplin?  See/hear/feel the fragment from Maximus (“I set out now / in a box upon the sea”), driftwood which Sanders collects into a hymn pyre.  Ed Sanders’ Death Boat for Olson is visionary poetry built solid as a Shaker chair waiting for god to sit down.  After we see the drawing of a chair-rocking Samuel Beckett in Murphy, Olson’s “how to dance / sitting down” doesn’t seem so cryptic. 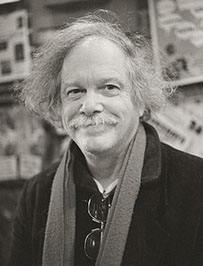