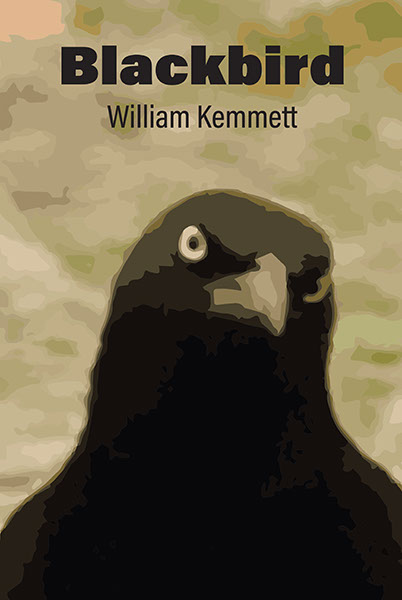 William Kemmett is a poet of global imagination, who takes you along on his morning walks from Port St. Lucie to Bombay, Tokyo, and back by way of the rain forest, where “There’s no written language” and “waterfalls cascade into mists.” His conversational poems are witty, informative and delightful.

William Kemmett is the Baudelaire of Port St. Lucie, the Hafiz of clouds, the Kabir of the ocean waves, and the Rumi of dust. He cuts no shit with a Walmart rose to the missus before a nice dinner of stuffed haddock, but he makes whales spout rain from the summer sky like a wandering conjurer of innocent dreams in Armenian freely translated into English. He writes lines as slender as church bells arriving through the air without cigars and swept into a civilized house, and yet at the same time his language breaks like waterfalls into a mist over our black granite souls and makes them bud like rhododendrons. Blue herons stand on one foot waiting. He is the master of kinetic stillness. His is a rarity. He is a child heroically flashing a wooden knife. He is a cactus flower revealed in a beam of penlight.

William Kemmett was raised in Boston, Massachusetts. His poems have appeared in numerous poetry magazines and journals, including Yankee Magazine, Cimarron Review, Defined Providence, Poetry Australia, Poetry East, Gargoyle, Mother India, Seattle Review, Calliope, The Café Review, Iowa Source, The Contemporary Review, Nixes Mate Review, The Tower Journal, and Hanging Loose. His poems have also been published in The Anthology of Magazine Verse: And Yearbook of American Poetry 1997, Carrying the Branch: Poets in Search of Peace (Glass Lyre Press), Conestoga Zen: An Anthology, edited by Rustin Larson. (Lulu Press 2021), and The Dark Matter of Words: Absence, Unknowing, and Emptiness in Literature by Timothy Walsh (So. Illinois U. Press 1999). He is a 2015 nominee of a Pushcart Prize, the recipient of awards from the Massachusetts Artists Foundation and the New England Poetry Club. He has also won two Yankee Magazine poetry prizes. He studied poetry at Harvard University and holds an MFA in Creative Writing from Vermont College of Fine Arts. The author of three full length books from Igneus Press, Flesh of a New Moon (1991), Hole in the Heart (2001), and Gold Vein Lightning (2019). He is also the author of Black Oil from deadCpress, in addition to several chapbooks published by Igneus Press and Wampeter Press.  He lives with his wife in Port St. Lucie, Florida.