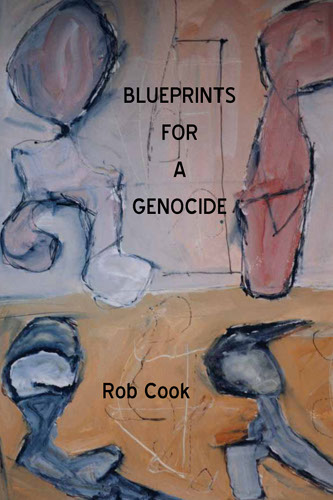 Blueprints for a Genocide

Rob Cook can be as unerring as a dream in fitting an image to the mood he wants to convey. His subconscious seems to be guiding him, but he is taking us through the real world and not a construct of fantasy. There is more than the title to make a reader nervous in Blueprints for a Genocide, although the simple insight in ”We will be returned to the cubicles/that have been dug for us” must bring a glow of satisfaction as we find the modern workplace recognized! And in nature, in a world seeming to be spinning in reverse, there are “winds/at the velocity of mountains/drifting deeper inside a goshawk.” Ever imaginative, the sequence unfolds with the language beautifully matching the adventurous vision of the poem.

Here comes a voice.  Deal with it.  Whatever dimension you’ve enlisted as your favorite poetry room, this is where the lamps are flickering like dragonflies and the clock beneath the window is howling like a thermometer.  Rob Cook’s Blueprints for a Genocide is that rarest of things, a truly modern poem, not just a post-modernist’s word trick, or a parlor toy, not just another boundary in facebook countries.  Here is the first real challenge. The first one that made it through the puncture holes where what seemed like sunlight, but was really just the nanosecond blinking of a satellite, seeped through.

Your book, the same Blueprints for a Genocide that you said would take seven minutes to read. Well, I've been reading it, over and over again, for days now and, trust me, I've put way more time into it than seven minutes.  This poem is some of your best work yet, and that is saying something.  It's like you grabbed the whole financial debacle by the balls and wouldn't let go until it admitted the truth about itself to you.  And I love how you have left me in a state where I can't look at the currency passing through my hands in the same way (the dollar as black hole freighter, the slave ossuary inside it, your fort on the surface of a quarter, the catacombs of a penny, the pennies biting and trading prayers).  And all the rest of the gorgeous imagery (Warm snow at the back of the throat) that I could endlessly quote.  What I've always loved about your work is that you force the reader to see the world anew, no holds barred. Or perhaps, just to really, really look past its shiny surface and see it more deeply.  All the emperors in this poem definitely have no clothes. And currency is so much more than its paper, metal, and the things we trade it for.  I just wanted you to know how brilliant I think the work is. And I mean that word, not just in terms of smartness, but also in terms of the light your poem casts on a subject that needs as much illumination as possible to cut through its darkness. What a lamp you've given the world, disguised as a book!

I read Blueprints For A Genocide and I think it's amazing - really it's a great piece and a great achievement.  The first things words that came into my mind were: indictment and lament. It observes everything and passes judgment rightly so and mourns. It struck me that it's not just an indictment of the these times (which of course it is), but of the whole human race, and perhaps of life itself. As to form, well I think it's fantastic on the page.

Congratulations on the book. It’s an eloquent anti-paean of disaffection, which is to say the condition of the human race, particularly this current American version of it. Orwell would love your book, as its work is that of taking back the English language from those who have colonized it for private purposes--the media, politicians, salesmen of various sorts. It’s a book poets can return to in order to refresh their own language. I also think of it as a series of embedded gems---my pen was constantly marking phrases that shone brightly and encapsulated a rich cluster of meanings. You have a genius for the just right “wrong” adjective, as in “dismantled rainbows.” I also thought the frequent formatting of the poem as one word per line was very appropriate and helpful, emphasizing as it did the poem’s imaginative leaps and surprising juxtapositions by slowing down the speed of their arrival. I’m a big fan of long sentences that proceed in their complex ways but never fall apart or collapse upon themselves, so such sentences of yours were a treat, two in particular, the one on p. vii that begins “And though the smell of you” and the one that constitutes the entirety of section 13 on p. 77. (“We puncture,” too, on p. 11.) I love about your book and your poetry generally how you constantly avoid swerving into well-worn linguistic and perceptual paths; you have a strong hand on the wheel and keep driving toward your goal, always leaning into and against the prevailing wind, never letting yourself be blown with it. Thanks, by the way, for teaching me the word “wendigo.” Although no doubt most of the time there is “no longer room / to speak without harm,” you manage to speak healing words, good medicine. 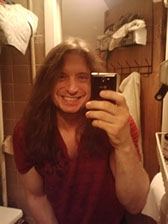