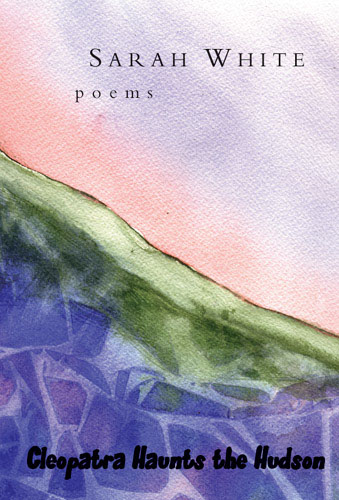 Sarah White’s Cleopatra Haunts the Hudson is an eloquently moving recherche du temps perdu. History is a treasury of ghostly personages whom White brings back and vivifies for us, usually to tell the stories of their losses—Cleopatra, Keats, Molière, Anne Frank, and many lesser known.  Families and love affairs also bequeath haunted elegies. But memory is fragile. Poems that call out to the dead or missing are broken by contrary winds. Indeed, some of the very poetic forms that White deploys in her recollections are assailed by disuse—sestina, villanelle, sonnet—so that many poems must turn upon themselves, examine their own ability to hold the right words fast, must argue with themselves about rhyme and cadence. And anyway, can all these absent ones being called upon in poem after poem hear the call of the speaker? In fact, in such one-sided dialogs can the speaker herself hold her own identity steady? Doppelgängers appear, shadows, doubles. This collection of poems is magical, uncanny, unnerving and consummately touching and beautiful.

Sarah White conjures visions from language that is at once beautifully precise and beautifully evocative. Sonnets, aubades and ballades display a deft penchant for form as she creates poems that resonate with achieved feeling. She acknowledges movingly the ever-shifting demarcations of loss while claiming the life of the poetic mind as a perennial.

At her ease, Sarah White juggles spots of time like lit torches. They shed light, for our pleasure, on landscapes imagined and real, inner and outer. Love and death, Cleopatra and the M4 bus: unmistakably poems, they deepen our understanding. Her lines and syntax score the sensuous, various music of a lively mind.

Sarah White moved to Manhattan in 1999 after retiring from Franklin and Marshall College in Lancaster, Pennsylvania, where she taught for 23 years in the Department of French and Italian. Her study of Romance literature, especially from the medieval period, informs her poetry, memoir, tales, translations, and libretti. Her verse has appeared in the Paris Review, Harvard Review, OC (a Toulouse journal of Occitan letters) and other magazines, and has been set to music by Kristina Boerger, John Carbon, and Tanya León. Prose writings include a memoir chapter, “The Jews of Spain,” published in Southwest Review, and she is co-translator of Songs of the Women Troubadours (Bruckner et al., Garland Press, 2000). She has been a Fellow of  Virginia Center for the Creative Arts and The MacDowell Colony. She is a mother of two and grandmother of four.