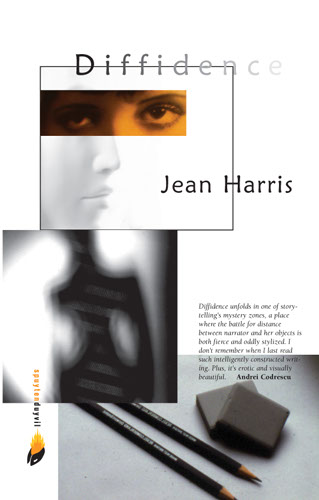 Jean Harris's territory is the psychology of the couple--its gaps and attractions, its pains and revelations. Intelligently hermetic, she negotiates souls. Diffidence is a mélange of air and stone, strength and vulnerability.  Powerful and sensitive at the same time, the novel squeezes destinies in one cup of prosa-forte that you

want to swallow sip by sip thinking of lost love and conquered vanities.

Carmen Firan, author of The Farce and Punished Candors

Jean Harris speaks to you in ways no one has spoken in recent fiction. The small surprises she offers with nearly every sentence are pure delight, and you find yourself turning the pages slowly and reluctantly. The good new is: you can always begin again.

Jean Harris is a novelist who lives in Long Island City, New York. Her first novel, Shadowzone appeared in 1997. It was published by Libra Press and launched in Bucharest, Romania by Professor Romul Munteanu. An English Professor and essayist, Harris has written literary criticism as well as texts on psychology and the origin and development of literary creativity.