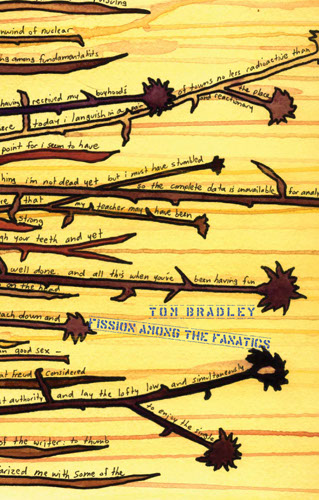 Fission Among the Fanatics is about growing up downwind of hydrogen bomb test sites (the sky turned black as midnight during lunchtime at my kindergarten), and receiving my writerly vocation among Mormon fundamentalists. I end up pursuing that vocation in exile, among religious nuts of a different stripe, in the most famous nuclear test sites of all: Hiroshima and Nagasaki. It’s a full-circle deal, with an extended stopover of several years in Red China.  (I was kicked out for political reasons, detailed in the book.)

Fission Among the Fanatics comes fully equipped with a critical appendix by Cye Johan.

Tom Bradley is one of the most criminally underrated authors on the planet.

This Bradley would make Lafcadio Hearn reel with laughter ... if not shake his head in wonder.   Lolita Lark, RALPH I love the contradictions in Bradley's work: the subtlety beneath the rollicking humour; the precision, in his more political work, underlying the scathing tone; and the simplicity  of his language throughout.

This is a book-length tour-de-force essay on Tom Bradley and The Sam Edwine Pentateuch. This may be the longest piece ever published in the Cybercorpse, and the first appearance of a genre so strange we are turning away from naming it...

What critics, editors and authors have said about Tom’s previous books:

I found Acting Alone to have an incredible energy level.

The contemporaries of Michelangelo found it useful to employ the term terribilita to characterize some of the expressions of his genius, and I will quote it here to sum up the shocking impact of this novel as a whole. I read it in a state of fascination,

R.V. Cassill, editor of The Norton Anthology of Short Fiction

Tom Bradley is a writer of truly extravagant gifts...It is remarkable to me that anyone who writes at such length could have an ear as fine as his for the rhythms of prose—but every sentence is considered, balanced and felicitous... I’d be hard pressed to think of any writer who has Bradley’s stamina, his range, his learning, his felicity.

Beyond the almost flawless surface of his stylistic facility, I am most impressed by Tom Bradley’s ability to walk the edge of a tone that is simultaneously irreverent and profoundly serious. His work derives from the tradition of bawdy and absurdist black comedy of the late sixties, but is not an imitative slave to that tradition. It seems to me that Bradley has learned well from that generation of authors, but has mitigated their example with an even more traditional moral seriousness. It is a delight to be able to laugh aloud when one reads, and it is even more satisfying for a reader to feel confident that there is a significant point to the laughter.

Gordon Weaver, author of The Way We Know in Dreams

A merciless humor and tireless passion for words not seen since the King James Bible drive Bradley’s work at bullet-train speed through unmapped areas of linguistic elasticity and imagination. Readers once begun will find their concentration hostaged from all other diversions until they reach the last page.

Tom Bradley taught British and American literature to Chinese graduate students in the years leading up to the Tiananmen Square massacre. He was politely invited to leave China after burning a batch of student essays about the democracy movement rather than surrendering them to "the leaders." He wound up teaching conversational skills to freshman dentistry majors in the Japanese "imperial university" where they used to vivisect our bomber pilots and serve their livers raw at festive banquets. But his writing somehow sustains him. Various of Tom's novels have been nominated for The Editor's Book Award and The New York University Bobst Prize, and one was a finalist in The AWP Award Series in the Novel.

Reviews, excerpts, links to his online publications, plus a couple hours of

recorded readings, are at http://tombradley.org