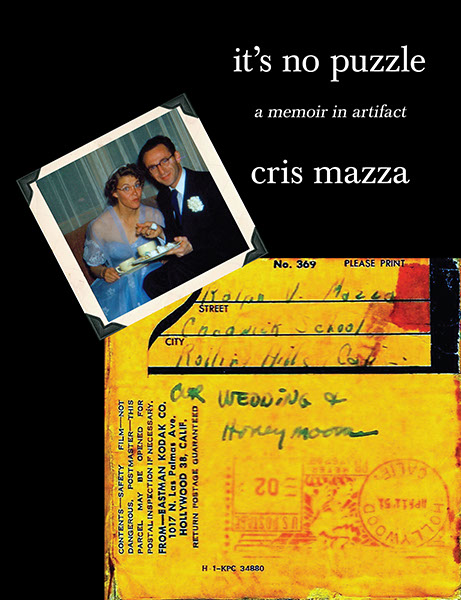 a memoir in artifact

In these linked essays, Cris Mazza probes questions of heritage, legacy, and identity. The result of collecting and preserving her parents’ personal artifacts—letters and photos, newspaper clippings, school records, baby books, yearbooks, concert programs, etc.—was not a linear narrative of their lives. Instead, the artifacts exposed mysteries, obscurities, ambiguities, odd juxtapositions, and questions. The individual stories of experiences—theirs as well as the traces of the author’s—are a scaffold to allow a closer glimpse at the culture in which her parents were forging their lives in 1940s and 50s Southern California. The postwar era is more complex, convoluted and iniquitous than the idealized “growth of the middle class.” Using these artifacts, the questions and research they provoke, Mazza put together the few puzzle pieces, then contemplated possibilities for a complete(r) picture. In so doing, she altered her own notions of the world she was born into and how it made her.

In a photograph deep in this book, Cris Mazza has a magnifying glass and more than 4000 of her mother’s slides laid out on a table. These are from a 35mm Leica her father brought home from Germany in 1946, she tells us, and she’s scanning them, one at a time, and trying to find their right order. This is just one of many perfect moments in It’s No Puzzle. It doesn’t just illustrate: it beckons, reaching out from the page, inviting us in to feel the strong pull of the past, as Mazza brings it to us, artifact after artifact after artifact. If you care for documents and objects and the stories they can tell about the past and our parents and the moments and world that made us, you’ll want to get lost in this detective story too. It’s No Puzzle is a wild and intimate documentary ride.

Ander Monson,  Author of I Will Take the Answer and Vanishing Point

A fact is a thing done, and a fiction is a thing made. Cris Mazza’s fabulous fabrication, It’s No Puzzle, inhabits the literal liminal paradoxical voids in between the in-between where facts shed foxed and faded ephemeric residue effortlessly and where Mazza elegantly sockets and solders together the memes of memory and the memoranda of mementoes. After more than a year of being timed-out in the out-of-time, I found Mazza’s intricate Tinguely-esque contraption of a book to be of this moment’s moment.  It sets all the clocks in all the time zones zooming again while, at the same time, revealing the inside-out workings of escapements, balances, springs, and jewels as they wind and mesh and coil. We can’t help but watch this watchmaker on her watch, making the watch that Cris Mazza is expertly keeping.

Author of The Complete Writings of Art Smith, The Bird Boy of Fort Wayne

Cris Mazza is both a national and deeply personal archivist of an America in crisis. Her work epitomizes the complex intersections between the personal and political, excavating grief, gender, objects, family, and history with a cool yet almost eerily intimate lens.”

Author of Blow Your House Down: A Story Of Family, Feminism, And Treason

Cris Mazza’s non-fiction, with its probing, searching, comprehensive need for the actual, regardless of difficulties that might be found there, is as important as her fiction, which is important indeed. When I think of the condition of the memoir today, longing for a time when it was more committed to the unvarnished human truths, this is a writer I think of with great admiration and respect.

Author of The Black Veil: A Memoir with Digressions and

The Long Accomplishment: A Memoir of Hope and Struggle in Matrimony

A dazzling array of starshot across the sky from the brilliant Cris Mazza, who reminds us again and again that we must not only hold the line when it comes to our individual and community worth, but endlessly imagine a future. Cris Mazza makes feminism act like a verb, an ever-adapting organism, a space of change.

Author of Thrust and Chronology of Water

It’s No Puzzle is a moving exploration of the intimacies of objects and their afterlives. With each essay, Cris Mazza explores the family archive to unearth queer love stories, reckon with racist histories, interrogate gender’s many makings and unmakings, and conjure memories of love and forgiveness. We learn not only about “mom,” “dad,” and Cris, but also about ourselves as we peer into this scrapbook, this bricolage of puzzle pieces that refuse the neat joining of the jigsaw puzzles “mom” so loved to solve. It is, indeed, no puzzle. There is nothing to solve here beyond the desire to account for life, love, and possibility in who we are or may become among the remnants of a history always in the making. 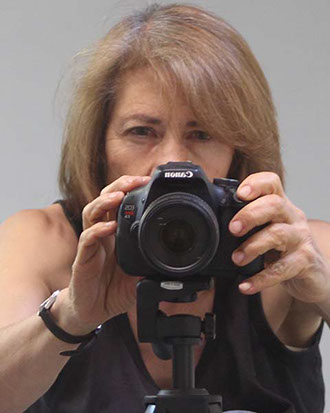 Cris Mazza, one of the originators of the term chick-lit before it meant urban-girls-looking-for-love, is a novelist and memoirist with 20 published books. Her titles include, most recently, a novel, Yet to Come, a story of marital angst in California’s Imperial County; and Something Wrong With Her, a real-time memoir. Mazza’s first novel How to Leave a Country won the PEN/Nelson Algren Award for book-length fiction. She is also author of the critically acclaimed Is It Sexual Harassment Yet? Mazza is a native of Southern California and is a professor in and director of the Program for Writers at the University of Illinois at Chicago.