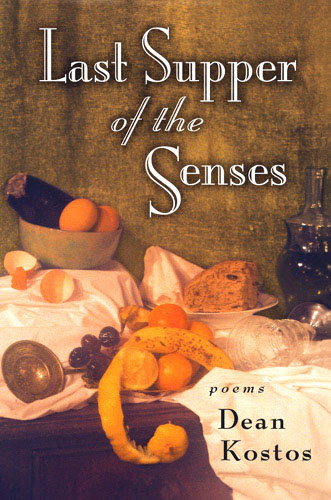 Last Supper of the Senses

However far Kostos’ journeys take him, however, whether in reality or in imagination, Greece remains the touchstone of his experience, the place which is both the source and goal of all his wanderings.  In “Golden Mouth,” he invokes his own birth, as “through aching/ flesh—the claret of my mother--/ I was spoken into/ World,” and in “Panayia” [“Virgin”], he sees in an Orthodox cathedral a vision of the Trinity that subsumes gender and generation in a vision of divine unity, of “Christ/ the mother—death fusing/ Madonna into Son, fe- and male into one.”  This, of course, is also the vision of Plato’s myth of a primal, pre-gendered state of being, of the unity of all our selves in one another.  It is also Dean Kostos’ own achievement in the remarkable banquet that is Last Supper of the Senses.

The collection probes how we are consumed even overwhelmed, by the sensual that is evident in both ordinary and extraordinary aspects of daily life. Kostos contemplates the sacrament of the Eucharist and theophagy on many levels. “First/ you must chew your flesh into speech. Try to make it last,” intones a poem entitled, “Eating God,” which opens with a young boy at a communion service and follows the poet’s spiritual wanderings as he “devours temporary gods…gnaws books.”

...That the Dauphin’s voice speaks to us after death is fitting, in this book that celebrates the power of words to cross the path between life and death.  But that Kostos has taken the historical figure of the Dauphin, lost and trapped within his family of foolish, doomed aristocrats, to be a character eminently worthy of our sympathy, reveals a superior imagination.  That’s the humanist quality I spoke of earlier, in Kostos’s work.  There’s also a poem in the book in memory of Matthew Shepherd.  It appears in the book four pages after the Dauphin poem ends. And in one poem Kostos reminds us, his readers, that the word “martyr” in Greek means “witness.”

Eschewing the banal and humdrum, Kostos is a true Greek—although a Greek-American—turning his back on “beige” suburban poetics to write artful verse that’s fired by passion. He wants to dare the universe. … In this vibrant collection of poetry, Kostos explores all five senses—sight, hearing, touch, smell, taste—with a section devoted to each. These vital human connections, the handmaidens of consciousness, link how we experience the world, are poetically lost, and then found.

The poetry of sensation arises at the intersection of world, nerve ending, and language. Dean Kostos is a carnivalesque wizard on all three fronts, a type that Huizinga called 'homo ludens,' man at play. The delight he takes in sonic invention, puns, and traditional verseforms draws us into the game with him—a game whose hilarity shouldn't blind us to the fact that he is also a poet of uncommon pathos.

What counts in essence for a poet, Auden once said, is to be in love with words. Dean Kostos, unafraid to call up feral, stipple, umbels, hiss of curls and bisque skin over a few stanzas, is never ornamental. Genuine spirits frequent his poems-Traherne, Keats, Dickinson, Stevens, Breton, Paz, Plath, Berryman, Michelangelo, Corot, Van Gogh, Utrillo, Kahlo-and Gaudí may be his closest daimon. With so many poets today airing their self-regard, Kostos mosaics his life and much else with startling words 'spoken into / World.'

Dean Kostos's Last Supper of the Senses evokes the tangible, carnal aspect of the spirit, over and over again, in permutations as diverse as chocolate fudge and church relics. His poems pirouette before us and we skip after, committed thereby to attempting anew the meld of body with soul. His is a vigorous and heady inspiration!

Praise for The Sentence That Ends with a Comma

Fluid is a good way to describe Dean Kostos's style-'calligraphy of swim on thirsty paper'-moving with ease between the classical and the contemporary, the seductive and the straightforward. Whether eavesdropping on mannequins in a bridal shop or wandering through a 'museum of scent,' the reader will be glad to follow his 'lines' lush variety' all the way to the last comma.

Like dreams we wake from, with such strong emotions that our whole days are cast in the colors of their images, Dean Kostos's poems startle us with pictograms of vividly emotional late twentieth century life. Lover of a linguistic curve, trained as a visual artist, Kostos takes us deep into his voluptuous sentences that are compelled to end with commas. Because he is so frank about his fears and so fearless about his imagery, the poet becomes a daring guide to a surreal world underpinned by the real pathos of love

Dean Kostos holds a Master’s degree in Creative Writing from Antioch University. He is the author of the collection The Sentence that Ends with a Comma (Painted Leaf Press, 1999; it was taught at Duke University, 2003) and the chapbook Celestial Rust (Red Dust Press, 1994).  He co-edited the anthology Mama's Boy: Gay Men Write About Their Mothers (Painted Leaf Press, 2000), a Lambda Book Award finalist. His poems have appeared in The American Poetry Review, Art & Understanding, Barrow Street, The Bitter Oleander, Blood and Tears (anthology), Bloom, Boulevard, Chelsea, The Cimarron Review, Exquisite Corpse, The International Poetry Review, The James White Review, The National Forum, Oprah Winfrey's Web site Oxygen, Poetry New York, Rattapallax, Southwest Review, The Western Humanities Review, and elsewhere. His translations from the Modern Greek and Spanish have appeared in Talisman, Bomb, and Barrow Street, his reviews in American Book Review, Bay Windows, and elsewhere.  Box-Triptych, his

choreo-poem, was staged at La Mama.  He has taught poetry writing at Pratt University, Gotham Writers' Workshop, Teachers & Writers Collaborative, The Great Lakes Colleges Association, and The Columbia Scholastic Press Association. He is a member of PEN

American Center, and was also the recipient of a Yaddo fellowship. Trained initially as a visual artist, his works have been exhibited in galleries and at the Brooklyn Museum.