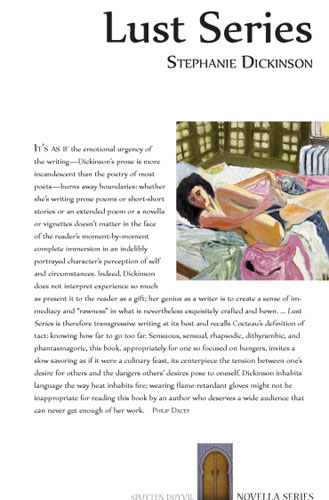 The “lust” in the title of Stephanie Dickinson’s new book can better be understood broadly as “hunger,” for want and need in various forms are enacted on page after page of this intense, riveting kaleidoscope of short prose pieces that defy categorization as genre. It’s as if the emotional urgency of the writing--Dickinson’s prose is more incandescent than the poetry of most poets--burns away boundaries: whether she’s writing prose poems or short-short stories or an extended poem or a novella or vignettes doesn’t matter in the face of the reader’s moment-by-moment complete immersion in an indelibly portrayed character’s perception of self and circumstances. Indeed, Dickinson does not interpret experience so much as present it to the reader as a gift; her genius as a writer is to create a sense of immediacy and “rawness” in what is nevertheless exquisitely crafted and hewn. Art versus life? Here is the miracle of both at once. Nor do the boundaries between only genres fall; in brilliant segment after brilliant segment, the borders prove to be porous between past and present, male and female, human and animal, living and dead, and urban and pastoral. The “I” daringly at times even seems to take on universal dimensions, becoming a kind of appetitive life-force. Lust Series is therefore transgressive writing at its best and recalls Cocteau’s definition of tact: knowing how far to go too far. Sensuous, sensual, rhapsodic, dithyrambic, and phantasmagoric, this book, appropriately for one so focused on hungers, invites a slow savoring as if it were a culinary feast, its centerpiece the tension between one’s desire for others and the dangers others’ desires pose to oneself. But first and last, the overriding hunger here is what Dickinson captures in the phrase “crave of tongue”: although tongue hungers to lick and taste, it primarily wants to make love to language, and this book is such a love-fest. Dickinson inhabits language the way heat inhabits fire; wearing flame-retardant gloves might not be inappropriate for reading this book by an author who deserves a wide audience that can never get enough of her work.

What a wonderful reading experience this is!  In each of these brightly illuminated texts,

we seem to have been air-dropped into a narrative whose details quickly establish themselves and fall into place as hints of a story break through the mesh of images. Stephanie Dickinson’s intuitive sense of drama finds expression in physical, sensual language that points to the origins of what has led up to the moment described in each short account. While the language shifts with the moods, the intensity never lets up.

Visceral.  Ecstatic.  Language shimmers beneath the pen Stephanie Dickinson hones to a blade, wields like a knife: shank in the hands of the innocent prisoner who’s survived every enemy; scalpel in the grasp of a surgeon who knows that to save is to excise the rot.  The immense power infusing all of Dickinson’s work is that she writes like her life depends on it; she’s the anointed girl “rambling from roof to roof sweating starlight,” giving voice to the runaway and raped, the stalker and stalked, the imprisoned, kidnapped, deformed and deranged, nature run riot, run rot.  She gives voice to the women taken in by the men “who talk a three-tier wedding cake,” the little deer (who tells of her killer), “He unfleshes my bones and says that he’s dressing me.” Dickinson’s heart is expansive, her empathy unbound as she embraces the lives of both the innocent and their aggressors.  In this beautiful book, Stephanie Dickinson masterfully gives witness to all of us finding ourselves at the mercy of our lusts.

Stephanie Dickinson was raised in rural Iowa and has passed time in Wyoming, Oregon, Minnesota,Texas, and Louisiana. She now lives in New York City. Along with Rob Cook, she publishes and edits the new literary journal Skidrow Penthouse. Her novel, HALF GIRL, won the Hackney Award (Birmingham-Southern) for best unpublished novel.