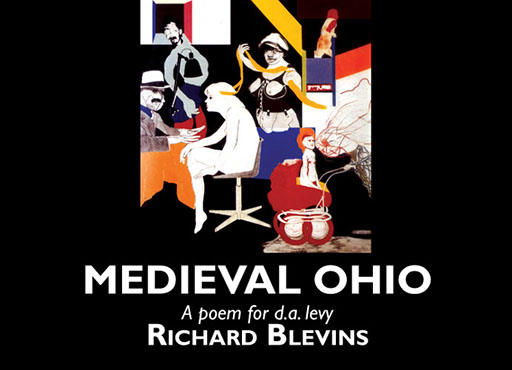 A poem for d.a. levy

The flowering of Richard Blevins’ awareness of d.a. levy has something of the character of a marvelous tree that used to grow from an eroding bluff above a railroad siding near Broadway and Pittsburgh in Cleveland. The mass of spilled roots, in direct opposition to the tropisms of its scattering limbs, contributed to some kind of balance that kept the tree poised on the edge of the precipice. Such a tree could inspire, depending on the current vagaries of the witnesses’ minds, befuddled amazement, elegiac sorrow, and an inexplicable faith that we, too, might continue to grow in the most oppressive of circumstances. Indeed, it was often these circumstances that provided the occasions for a kind of strength that sometimes compromised leaves but never lost sought sight of a sky. Richard’s struggle with this poem has more sweetly contradictory, multilayered, and internalized road signs than the intersection of Broadway and Pittsburgh where, for all I know, a hopeless confusion of signs denoting distances to other cities still stands, and the living refutation of forces that would pull it down and uproot it, yet reigns.

Richard Blevins’ Fogbow Bridge: Selected Poems, 1972-1999 was published by Pavement Saw. He edited two volumes of the Charles Olson/Robert Creeley correspondence for Black Sparrow. His dissertation is on Will Henry. He lives and teaches, in western Pennsylvania, with his wife Martha Koehler and their two daughters.