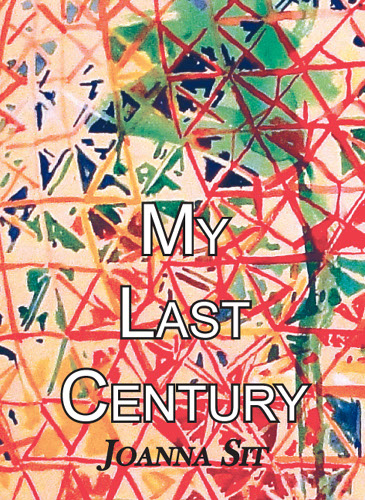 Joanna Sit recognizes the poem as a journey, as a lived experience, as meditation. My Last Century is a journey through the wreckage of the world we truly live in, where “an alien space ship wrecked beyond return” might be serenaded by the 50 greatest Taiwanese love songs; a journey which yields, ultimately, an unexpected and hard-earned tenderness, with a voice that says, “I will lie down with heroes/ with bums, with outcasts/ and I will say, how lovely/ this city of mine.”

As the book’s title suggests, the poems in this collection span more than a lifetime and, in geographic terms, a good part of the world. Here, Joanna Sit pays tribute to those who went before her and those who now live with her in verse that is descriptive, evocative and crystalline. Moreover, there is the poet herself, who, through her yearning, achieves a transcendence through sympathy and quiet song.

If Li Po and Francis of Assisi were to collaborate on a verse treatment of Valley of the Dolls, it might look a little like My Last Century. The specter of apocalypse throws a trace of a shadow over the party, but this debut collection still shows its reader a good time! Heart, physics, metaphysics and sharp humor abound, radiating out to all parts of the created world—China, Havana, Coney Island—while simultaneously setting its sights on the landscape within. Sit’s concerns are lyric, but her proportions are epic. My Last Century is a book of surprising beauty.

Joanna Sit’s poems and translations have appeared most recently in The Seneca Review, The Relief Journal, Natural Bridge, Lalitamba, and on-line in Fickle Muses, The Tonopah Review, Poem, and Ezra. She is a member of the Urgent Mischief Troupe and lives in Brooklyn with her husband and daughter.