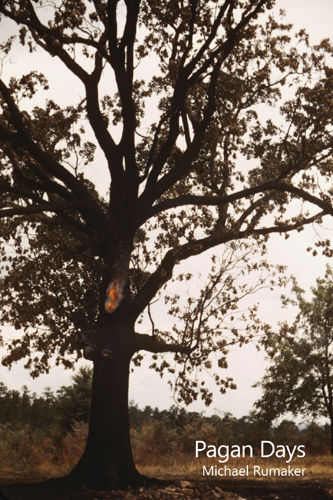 Mickey seems to see and hear everything, revealing as he does, Michael Rumaker’s amazing abilities as a novelist. Rumaker has a wonderful eye for realistic detail and an exceptional ear for dialogue. His ability to create realistic American characters living in 20th century America rivals any American novelist I have ever read. Pagan Days is one of the best novels I’ve read in a lifetime of reading. Michael Rumaker is a working-class Marcel Proust, a great novelist, inspired by memory to write this truly memorable novel.

Mickey’s days as a “pagan” open his eyes to an almost mystical, but certainly aesthetic, view of the world where each experience, no matter how difficult or painful, offers him a vision that will carry him through life. Pagan Days enriches our literature, and reinforces that the avant-garde need not be unintelligible to communicate the complexity of being human. Rumaker’s characters breathe like Rodin’s figures—they are alive, real, sinewy, torn, ecstatic, and transformative.

Michael Rumaker is an American author (born March 5, 1932 in Philadelphia, PA), to Michael Joseph and Winifred Marvel Rumaker. He is a graduate of Black Mountain College (1955) and Columbia University (1970). Most of Rumaker's fiction concerns his life as a gay man. His first book, The Butterfly, is a fictionalized memoir of his brief affair with a young Yoko Ono, published before Ono became famous. His short stories, Gringos and other stories, appeared in 1967. A revised and expanded version appeared in 1991. He began to write directly about his life as a gay man in the volumes A Day and a Night at the Baths (1979, Triton 20010) and My First Satyrnalia (1981). The novel Pagan Days (1991, reprinted 2013 by SD) is told from the perspective of an eight-year old boy struggling to understand his gay self. Black Mountain Days, a memoir of his time at Black Mountain College, has a strong autobiographical element. In addition, there are portraits of many students, faculty, and visitors (especially the poets Robert Creeley and Charles Olson) during its last years, 1952-1956.