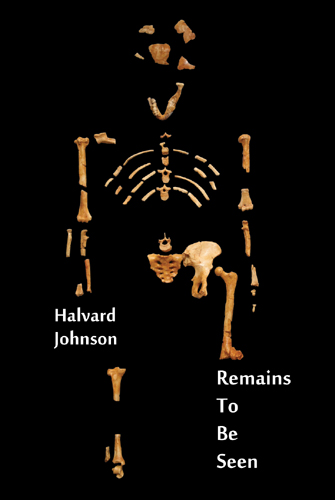 Remains To Be Seen

Probably everyone who reads poetry year after year knows of a favorite poet whose reputation should be larger than it is, and my candidate for that position is Halvard Johnson. I am not alone in this opinion. The first time I met James Wright, we talked about poets whose work we felt should be better known, and I mentioned Halvard Johnson. Wright nodded silently, sat back, and recited from memory the whole of Hal’s poem "Black River Bridge."

Hal Johnson's work is remarkable for its intelligence, its perfect tuning (he has a remarkable ear for line-cadences), great thoughtfulness and wit, and its ability to surprise, to take unexpected turns. Without solemnity, Hal conjures up a mysterious, disturbing world in his poetry, a world in which fantasies and meditations are interchanged with actions and concrete details. One constantly feels in his work the sense of the known and the knowable slipping away, and in this respect, and in its refusal to be pinned down, Hal's work has some similarities to John Ashbery's.

But in other respects his work is like no one else's. I have been personally affected by many of his poems, including "Winter Journey," the title poem of one of his collections. This long narrative poem, which is also a meditation on recent American history, touches upon culture, consciousness, and fantasy at their meeting-points; it is also, I think, about the nature of accidents. I consider it a profound and moving poem, one that can stand with the best of recent American poetry.

Halvard Johnson . . . writes narratives, which are absurd fragments of chaos rather than elegant aesthetic forms; yet in energetic bursts of wit they exhibit uncanny control . . . Johnson casts these clever shadows to the edge of nonsense where media glibly flash the surreal, and enduring concepts get devoured in sound bites.      ROBERTO BONAZZI

Many poets send me their books, but few I’ve received are as fine as Halvard Johnson’s Guide to the Tokyo Subway. I have at least fourteen favorite poems, including “Morning Calm,” “Paris in Old Photographs,” “La Violencia,” “How to Write Your Own Obituary,” and “Take Me to the Water.” And for sheer delight, “Thirteen Variations on a Line by Robert Frost.” In just about all the poems there’s something fascinating—an image, a tone, a total consciousness (often an achieved calm), an experiment with sound or phrasing. I found myself re-reading many of the poems, so many are ‘locked’ and provide complete satisfaction. It’s also the wide range of Guide to the Tokyo Subway that I greatly admire, the complete interest Halvard Johnson brings to so many things, the expansiveness of these poems even while they’re leading us to still moments. I’ve never seen another poet acknowledge the nuclear power plant, include it in solid lines, and then, in the same poem, move beyond it out to the Zen-like horizon in that unique ‘bomb and calm’ style which is all Johnson’s own.       DICK ALLEN

Halvard Johnson’s book Organ Harvest with Entrance of Clones represents the work of a quiet pluralist who is by equal measure amazed by the world and dismayed & angered by those who would control it. The poems here range from abstract musings (or amusements) on relationships to ironic assaults on the hypocrisies that run through the current political landscape. Throughout, Johnson uses the fungibility of language to say at least two things at every opportunity, one of them literal and the other ironic or whimsical. There is an aspect of jesterism or merry prankster in each poem, though at the center of the book is an optimism that our ‘better natures’ still reside in us somewhere and that eventually, perhaps through the application of poetry and intelligence, they will rise to the surface, if only just in time. A solid book recommended.     JORN AKE

He’s the first poet I’ve read in a long time who makes sense of what’s going on in the world.       EDWARD FIELD 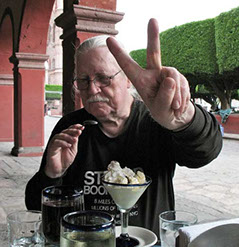 HALVARD JOHNSON was born in Newburgh, New York, and grew up in New York City and the Hudson Valley. He has received grants and fellowships from the National Endowment for the Arts, the Maryland State Arts Council, the Woodrow Wilson Foundation, Baltimore City Arts, the Ragdale Foundation, and the Virginia Center for the Creative Arts. He has lived and taught in Chicago, Illinois; El Paso, Texas; Cayey, Puerto Rico; Washington, D.C.; Baltimore, Maryland; and New York City. For many years he taught overseas in the European and Far East divisions of the University of Maryland, mostly in Germany and Japan. Currently, he lives with his wife, the prize-winning writer and visual artist Lynda Schor in San Miguel de Allende, Guanajuato, Mexico.