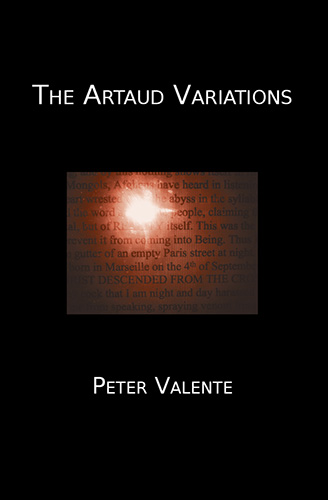 Cole Heinowitz, from the introduction

Peter Valente has rendered Artaud’s final writings, notably texts from Suppôts et Suppliciations, with a raw slaughterhouse magnificence and imaginative velocity that create new apertures through which to perceive Artaud’s most extreme and challenging work.

Stephen Barber, author of The Anatomy Of Cruelty: Antonin Artaud: Life And Works

Peter Valente has done everything that a translator/reader of Artaud shouldn’t do: he crossed the line and merged his own writing with the original. But he did it to such mind-blowing extreme that Artaud’s voice becomes his own. An amazing feat. 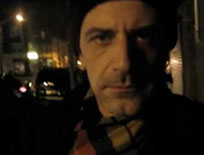 Peter Valente was born in Salerno, Italy and grew up in New Jersey.  He holds a B. S. in Electrical Engineering from Stevens Institute of Technology. He is the author of the chapbook, Forge of Words a Forest (Jensen Daniels, 1998), and his poems have appeared in journals such as Mirage #4/Periodical, First Intensity, Aufgabe and Talisman. In the late 1990s, he co-edited the poetry magazines Vapor/Strains and Lady Blizzard’s Batmobile and wrote articles on jazz for the Edgewater Reporter. In 2010, he turned to filmmaking and has completed 60 shorts to date, 24 of which were screened at Anthology Film Archives. He has translated the work of Luis Cernuda, Nanni Balestrini and Pier Paolo Pasolini and is the co-translator of the chapbook, Selected Late Letters of Antonin Artaud, 1945-1947 (Portable Press at Yo-Yo Labs, 2014). His book, A Boy Asleep Under the Sun, Versions of Sandro Penna is forthcoming from Punctum Books.