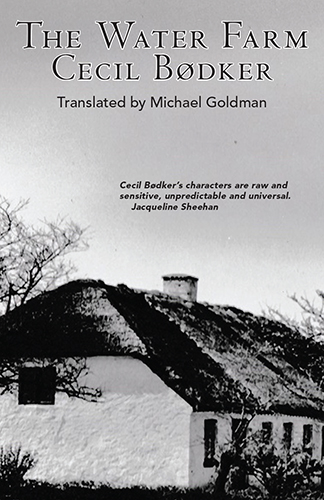 A small group of social outcasts form a reluctant community on an abandoned farm in rural Denmark in the 1800s. Betrayal, flight and redemption, framed by relationships stretched across social standing, age and gender, The Water Farm brings their world to life. Cecil Bødker is one of Denmark’s literary masters.

The Water Farm is mesmerizing and tender. A deceptively simple story, with characters both real and extraordinary. It’s surprising how relevant a book this is, exploring the making of art and the forging of human connections outside societal norms.

Michael Goldman’s translation of The Water Farm is riveting. This world is steeped with the unexpected, where fourteen year old girls have iron resolve, old men care for lost children, and love walks hand in hand with trust. No wonder Cecil Bødker is a literary treasure of Denmark.

author of The Center of the World

…The Water Farm is a place of death, slowly returning to life.

…every word believable. Quite a rare achievement. The Water Farm is the ideal of fine, unassuming, story-telling craft.

Cecil Bødker has cemented herself as one of the most important Danish authors of our time. Touching, harrowing, uplifting, The Water Farm, is as much a delight to read as it is impossible to put down.

Michael Favala Goldman (b.1966), besides being a widely-published translator of Danish literature, is a poet, jazz clarinetist, gardener, father and husband. Over 100 of Goldman's translations have appeared in dozens of literary journals such as The Harvard Review and The Columbia Journal. He teaches workshops and gives readings at universities and literary events. His recent translated books include works by Knud Sørensen, Cecil Bødker, Knud Sønderby, Marianne Koluda Hansen and Benny Andersen. www.hammerandhorn.net